Monday – Thursday:  For the most part, not a very exciting week.  I wasn’t able to train for the bulk of the week due to some lingering effects from that medical thing from the previous week.  So instead, I mostly just worked.  Boo.

Friday:  First day back!  Since I was coming back from a little medical setback, this week wasn’t about speedwork or anything really crazy.  Instead, I went out in the afternoon and busted out a strong 4.5 trail miles.  I continued to see improvement with my pace and climbing.  I still have a long way to go, but it’s definitely a step in the right direction!  Even with stopping to take the occasional picture (it was a crazy hot, and beautiful day), my average pace was still just under 12:00/mile, which used to be my awesome-busting-ass-pace.  So hooray! 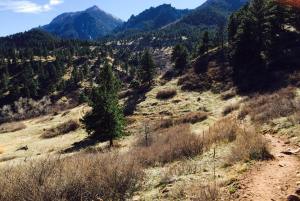 Saturday:  Saturday was time for a nice long run.  It was a gorgeous day, and I planned to get out for a long run with Molly and another awesome runner girlfriend of ours, Cheryl.  Cheryl is totally badass, and was tapering for her first 50 mile run the following weekend, so she is far beyond my abilities – especially considering how far behind the last year of school has put me.  Needless to say, I was a little worried about running with the two of them, but also looking forward to it.  We always have a good time together on the trails.

We headed out from Cheryl’s house and started the long 2.5 mile nonstop, gradual climb up on to the mesa trail.  It only took about a quarter mile for Molly and Cheryl to pull ahead of me, and I was slogging along, bringing up the rear, and getting really upset with myself.  Here I thought I had been improving, and yet, I still suck.  WTF.

Molly and Cheryl ran along ahead and left me in the dust.  After about a mile and a half, I caught up with them (they had stopped to wait for me), and Cheryl immediately took off again.  I was pissed.  The slowest person in the group is the one who needs the rest break the most!  So I angrily said “fuck this, I’m out” and turned around to head back down the trail on my own.  They could go off and kill it together.  I was pissed and pouting.

I ran about 1/10 of a mile back down the trail, and decided to sit on a rock for a minute and just cool down.  After calming myself down, I decided to push on on my own because I knew I would be upset with myself for giving up on the run.

I started back up the trail, grumbling to myself about what turds they were being (they were fine – I was just being really grumpy).  The climb up the mesa was long and tiring, but eventually I got to the top and picked the pace back up.  From the top of one of the hills, I saw Molly and Cheryl off in the distance, and decided to try and catch them.  There were several downhills coming up, which is my strength, so it was worth a shot.

After another mile or so, I managed to catch up with them.  I was cranky and a little grumpy, but happy to see them again.  Cheryl decided to take off on her own, since she had something very specific she was trying to do that day, and Molly and I continued on together.

After Molly gave me some tough love – basically telling me to shut up and stop being a brat, which I was (thank goodness for training partners who know you well) – we ended up having a great day!  The trail was perfect and runnable, and we wandered our way south out of Boulder for several miles until it was time to turn around and head back.  We ended up doing 14.25 miles and had a lovely afternoon after all. 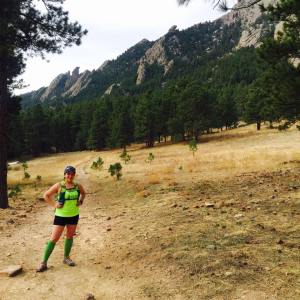 Enjoying the Mesa Trail at the base of the Flatirons

Sunday:  Molly and I were both rather sore and tired from our long run the day before, so today we celebrated the fourth anniversary of her spinal fusion by enjoying a delicious brunch at our favorite indulgent breakfast place, Snooze.

What worked well this week:  Talking myself into continuing on for the long run on Saturday.  I could have easily given up and headed home, but I’m glad I stuck with it.

What I struggled with:  Medical things outside of my control.

What I will do to improve next week:  Get back on my training plan.  I’ve been doing pretty well with it, and I want to continue with that momentum.

Total weekly mileage:   18.75 miles.  Not terrible considering I was out of commission for most of the week.