Yesterday, my friend Tara and I, and about 65 other runners, had a blast running from Nederland to Boulder for the Fatass Frozen Dead Guy 50k.  It was exhausting, but a great time.  Although this was not an official race – really just a glorified group run – this is, to date, my longest run ever, and my first “ultra.”

Since this was a point-to-point run, our morning started out with dropping off one of our cars at Chataqua Park in Boulder, picking up a few other runners, and heading up to Nederland – about 17 miles west up Boulder Canyon.  Several of us ended up grabbing coffee, tea, and snacks at New Moon in Ned before heading over to the Carousel of Happiness and the start.

People were all milling around and chatting – greeting old friends and making new ones – one of my favorite things about events like this.  John, the organizer of these events, made a few announcements from the top of his car, and then we were off! 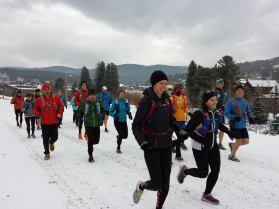 Although this run was a net downhill, there was certainly no lack of butt-kicking climbs.  The first several miles weren’t too bad, but it always takes me a while to get warmed up, and climbs are a little ugly until that happens, so we took our time and enjoyed a leisurely pace out of Ned.  Along the way, we lamented the fogginess, chatted about random things, and met some other runners around us.

After a few miles, we made a right turn onto 68, stopped at the aid station (awesome volunteers!) so Tara could dislodge the mound of rock and ice that had become embedded in the bottom of her shoe (road shoes =/= trail shoes), and had a stretch of decent downhill.

After not too long, we reached the trail for the Twin Sisters.  Many of the fast people in the group had taken this side trek to the summit, but since there was really no view at the top today (too cloudy), and we were bringing up the rear (we were calling ourselves the unofficial sweepers), we decided to skip it and continue on.

Eventually, the road we were on turned into Flagstaff Road, and we found ourselves back with the pack.  We followed Flagstaff until we reached the Walker Ranch trail head, and the second aid station.  After a brief break for some snacks, we were off again.

We headed clockwise around Walker Ranch, until we got down to the river and the split for the Eldorado Canyon trail.  The run through Walker Ranch was spectacular – great views and a runnable trail.  We definitely stopped here and there for some fun pictures and moments to take in the view.  The trails were a little icy at times, but nothing too icy to manage.  There were moments where I was wishing I had brought my screw shoes (I was testing out my Hokas this time), but those were brief.  The climb up to the top of the ridge on the Eldorado trail was steep and slow going, but once we got to the top, the view was excellent! 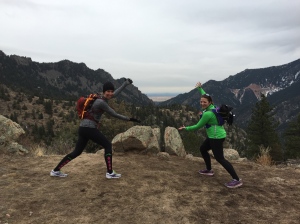 The picture doesn’t do it justice.

We made our way down the Eldo trail and into the park.  Quite possibly the hardest part of the day was coming down all the stairs at the end of this long downhill.  By the time we reached the park road, our legs were wiped out.

We followed the road out of the park, and made it to the third and final aid station.  It was here that we picked up a third for our little group – Ruth.  At this point, my sprained ankle (rolled it on a run two weeks ago) was not thrilled with me, Tara’s knee was killing her, and Ruth’s legs were done.  The three of us decided to stick together for the last 6 or so miles back to Boulder.

We left the Eldorado park with a few other people, and made our way to what we thought was the Old Mesa Trail.  After huffing and puffing our way up to the top of one of the hogback ridges, we discovered that we made a wrong turn, and had climbed all the way up the ridge, when we were supposed to stay in the valley.

We very carefully made our way back down to the valley and the right trail.  All in all, this little detour took an extra 45 minutes, and destroyed Tara’s quads for the day.  The climb back down was definitely not easy. 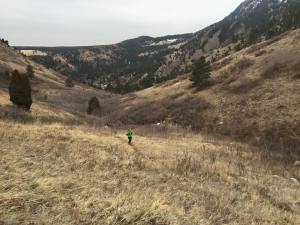 Once we finally got onto the right trail, the rest of the way back was pretty simple.  We followed the Mesa Trail all the way north to Chataqua Park in Boulder.  At this point, we were going pretty slowly because we were all quite sore and tired, but we were making steady progress.  About 2.5 miles from the end, Tara decided to run the uphills because it actually made her legs hurt less than walking, so we didn’t see her again until we reached the end.

After what felt like an eternity, Ruth and I could tell we were getting close.  After 8+ hours on trails, logic starts to get weird.  We spotted a group of people pushing a stroller along the path, and I found myself saying “Alright, we must be close.  They have a stroller.  They can’t have gone far.  Also, look at her shoes.  She’s not hiking.”  Somehow, we found this really amusing.  I still maintain that those were pretty good observations.  🙂

A few minutes after that, we rounded a corner, and saw the Chataqua parking lot, and Baseline Road.

Some people from our group were hanging out at the bottom of the hill, and we happily ran towards them.  There were plenty of hugs, high fives, and pictures to celebrate.

How we actually felt.

Total mileage was somewhere between 27 and 29 miles.  Watches are notoriously difficult to rely on when you’re in trees and going slowly.  But either way, this is still my longest run ever.  We had such a blast!  It was 8:34:00 of fun.  Can’t wait for the next one!